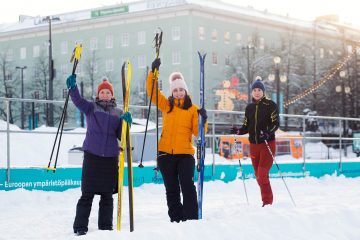 The Finnish city of Lahti is rolling out the world’s first urban ski-sharing program. Lahti, the reigning European Green Capital, wants to encourage people to reduce their transport-related carbon emissions. Finns are no strangers to snow, but when the roads get icy and the snow is knee-deep, skiing might just be the fastest way to get around. That’s why the city of Lahti in Southern Finland has decided to roll-out a public ski-sharing scheme, the first city in the world to do so.  “City Skis work the same as city bikes: the skis can be borrowed from a ski point, where they should be returned to after use,” says Saara Vauramo, the programme director of Lahti European Green Capital. There

The lifts have rusted, the snow is virgin, spring skiing via telemark - mountain equipment par excellence. The roads are difficult until mid June; conditions good until mid July. Terrain: difficult to reach, difficult to ski. The huts are heaven in a desert and the hostesses: inspiring?